A sensitive test for studying the analgesic properties of pharmacological substances. It can also be used to evaluate basal thermal pain sensitivity or to study putative genetic differences among animals without drugs. 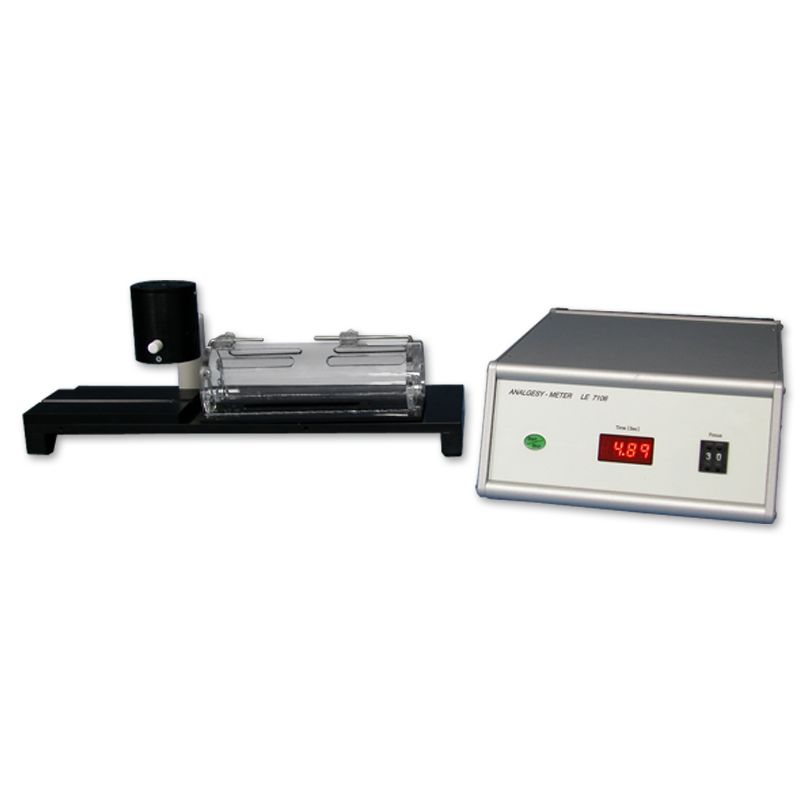 This test has proved particularly sensitive for studying the analgesic properties of pharmacological substances. It can also be used to evaluate basal thermal pain sensitivity or to study putative genetic differences among animals without drugs.

Description of the system

The Panlab Tail-flick Meter consists of a stimulation unit (containing the halogen lamp for the heat stimulus) and an electronic control unit. The system can be used for rats and mice of different sizes. The animals are placed with its tail protruding within a restraining tube on the platform of the Stimulus Unit. The animal's tail is positioned on a slot of adjustable width equipped with a groove that guarantees a correct placement. A remote foot-switch controls the test start/stop allowing rapid hands-free experiments.

A photo beam with adjustable sensitivity detects the tail flick and the latency is automatically presented on a digital display on the Control Unit. Measurements of reaction time are given with a 0.1 precision. A cut-off time can be set to avoid tissue damage (by default: 20 s). The groove system for the tail and the adjustment of response sensitivity ensure optimum repeatability and reliability of results.

The animal has to stay completely still during the test so that the flick of the tail can be considered as a specific response to the thermal stimulus. A restrainer can be used for optimizing the inmobility of the animal in these conditions. The stress of the animal has also to be minimized during the test for minimizing the release of endogenous opioids that may alter the animal response. As the restraint conditions can be a stressful for the animal, a period of habituation is needed for the test. Experienced experimenters can perform the test without any restrainers.

The new SEDACOM 2.0 version provides an easy and convenient way to visualize and export the data on a computer for further analysis. The SEDACOM software has to be purchased separately.

The tail-temperature recorder (76-0294) can be used for evaluating the temperature of the tail during the experiment.